Yesterday morning Luke and I arrived at the hospital at 6AM. Olivia’s muscle biopsy was scheduled for “first case”, which is set to start at 6:30AM. Prior to her being called to the operating room , we had brief visits from a surgical resident, and an anesthesiologist resident. Both provided us with an overview of what their teams would be doing, and were prepared to answer any questions we had about the procedure.

She was eventually “called” down to the OR just before 7:00AM.

Transporting a baby from the NICU to anywhere else in the hospital is a bit complicated, especially when the baby is ventilated. We knew this from Olivia’s prior trips downstairs. Once for an MRI, another time for the HIDA scan. The transport consisted of her nurse, a respiratory technician, a NICU fellow, and the anesthesiologist resident. Luke and I were able to travel downstairs with Olivia and the team, but had to say our goodbyes just inside the surgical waiting room. Thankfully, I found saying bye far less traumatic and emotionally draining than I had anticipated. A quick kiss and a squeeze and we were off.

The procedure was pretty quick, and went well. Taking the muscle sample was met with no complications, and Olivia had no negative reactions to the anesthesia. The fact that she would be going under anesthesia was more risky than the procedure itself, because people with myopathies can experience a range of adverse reactions to certain anesthetic drugs used during surgery. Certain ones can cause potentially fatal reactions, one being malignant hyperthermia, which refers to a dangerously high increase in body temperature.

The pediatric anesthesiologists were aware of this potential complication, so they took a series of specific precautions designed to (1) mitigate the likelihood of it occurring and (2) prepare the room should it occur.

But that didn’t happen, and the procedure went fine, and the tissue sample was “checked in” to the hospital’s pathology department yesterday… so now all we do is wait for results. We’ve been told to expect a turnaround time of anywhere from 2-3 days, to 2 weeks, so we are once again planning to practice being patient.

After the procedure, Olivia returned to her room wide awake and wiggly. Not the sedated and sore picture that we had expected!

The recovery from the procedure is minimal. She has an incision on her left upper thigh, but the list of things to avoid is short. No baths for 3-5 days. No physical therapy for 2-4 weeks. She isn’t on any pain medication, and the team doesn’t expect her leg to bother her much. She’s still kicking and stretching it out, and we’ve been touching and lifting it to change diapers, positions, etc. without much fuss.

She slept quite a bit yesterday, but besides that, she’s pretty much back to her usual self. 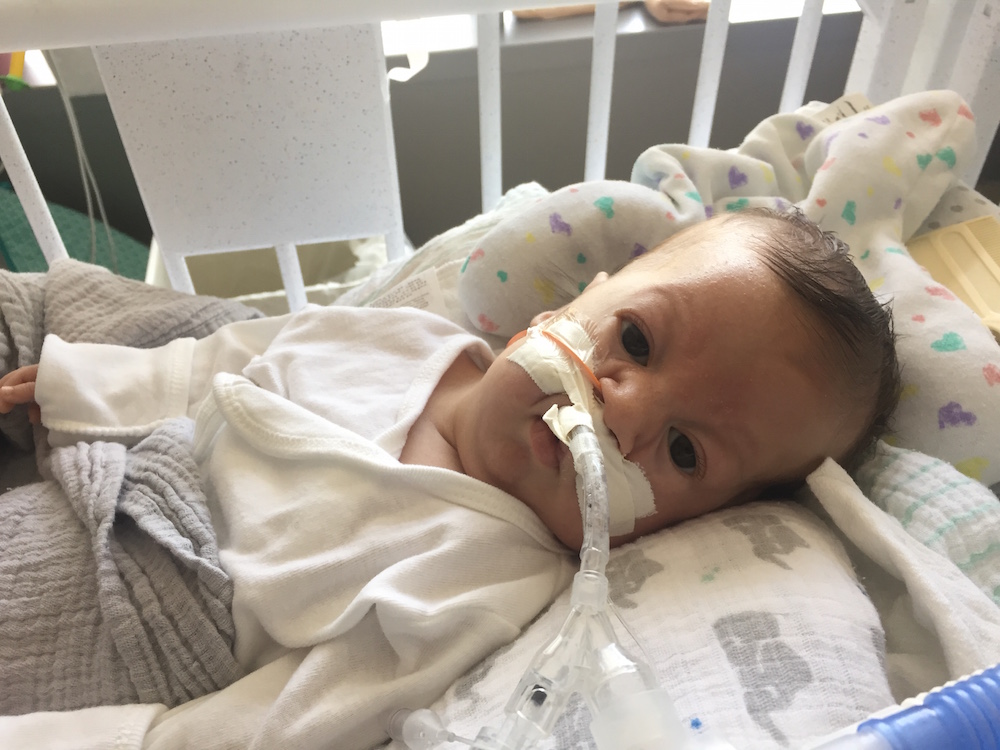 Today we did start her 2 month vaccines, which will be given in a series of 3 shots, spaced out over 6 days. She barely flinched when she received the first shot, and hasn’t cried or fussed since, but we’re now on the watch out for a cranky baby!