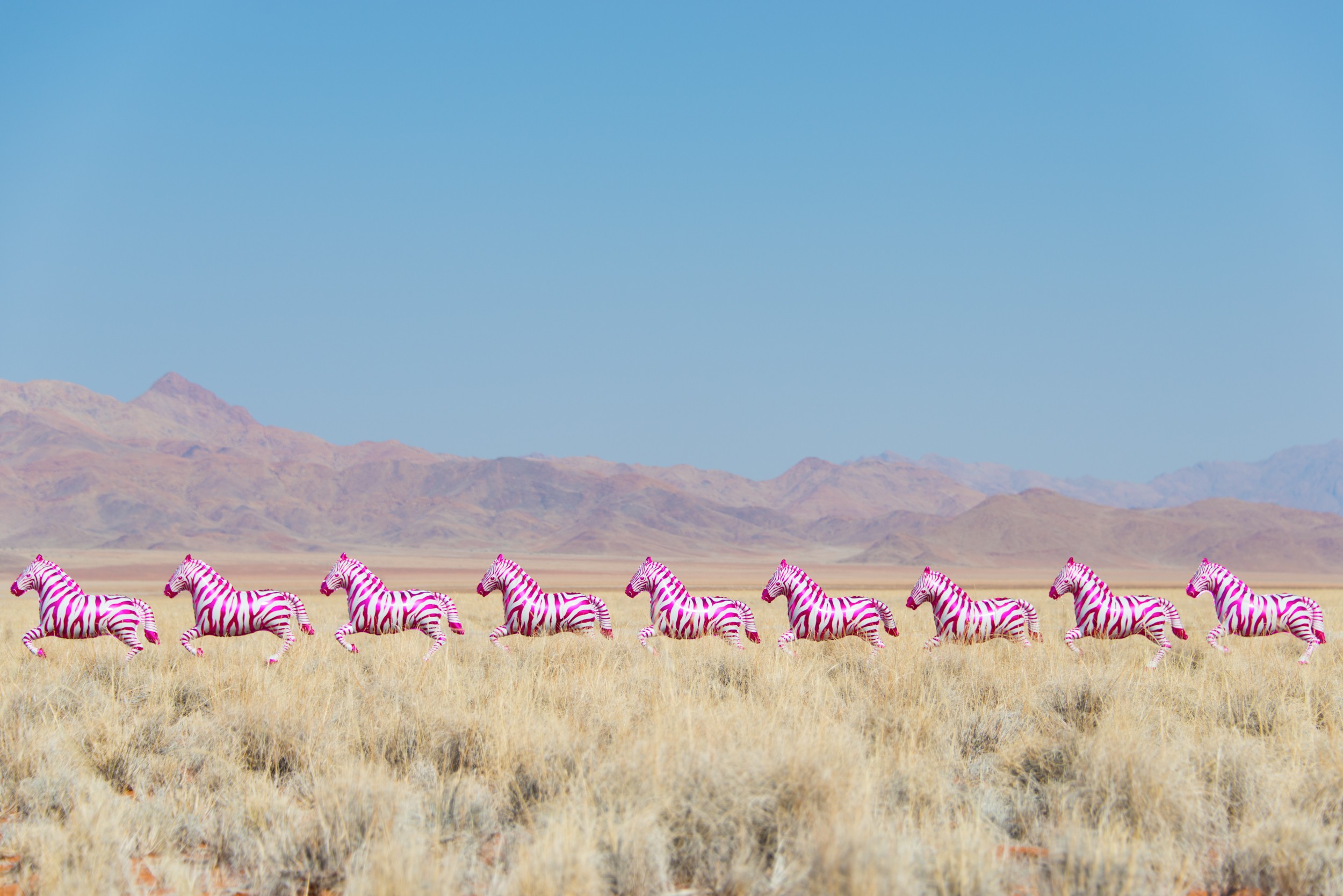 There’s a saying in medicine, that goes something like “When you hear hoofbeats, think of horses not zebras.” If you’re unfamiliar with the aphorism, as both Luke and I were before Olivia was born, Google it later. For now, just stick with me.

See, in the world of medicine and diagnoses, there are horses. And then there are zebras. There are the more common, obvious diagnoses. (Those are the horses.) And then there are the zebras: the unexpected, the uncommon, the rare. The saying itself is actually directed towards medical professionals, and it has to do with the process (and risks) of reaching a diagnosis, but that’s not the point right now.

The point is that there are some conditions that are common, and some that are rare.

In Olivia’s case, it’s like we’re searching for a zebra on the streets of Western New York. For two months, she stumped the hospital’s top geneticist and top pediatric neuromuscular specialist. Time and time again they would visit her room, assess her, pick up on physical anomalies and point out new “clues”, but left telling us that she didn’t seem to fit the mold of any one particular disorder. And these people are no slouches! These are the specialists whose colleagues describe as “the encyclopedia of genetics”. Another team member described one by saying, “he’s the kind of guru who can diagnosis a child with a very rare disorder while still standing in the doorway, before he even walks into their room. Literally.”

To stump the best of the best is quiet impressive, little girl.

The gene sequencing seems to have confirmed it. Olivia’s symptoms are all relatively common when compared to some families of neuromuscular disorders. Muscle weakness, respiratory complications, the facial features… But the specific gene mutation identified in the test has never before been described. Never.

Olivia Grace, meeting you is more special, more unique, more truly one-of-a-kind than encountering a zebra on the streets of Rochester.

All of this is particularly intriguing to me. Intriguing, and ironic, and magical all at the same time. Because of this piece of art above. I began looking for inspiration for Olivia’s nursery in December. I originally wanted something classic with a splash of sass. I didn’t want the room to be filled with anything overtly girly, or baby like. I wanted the room to fit in with the rest of our house, and for those of you who have never seen our house: there is not one ounce of pink. Well, the direction of her nursery took a drastic turn. It is absolutely overtly girly, and filled with things that scream “nursery”. It is so clearly a baby’s room, and there is far too much pink, and most items will be outgrown, but oh well. I went there and I kind of love it so it is what it is. Baby girls will do that to you, I guess.

Back to the intriguing, the ironic, the magical part.

The photograph above was the start of my vision for Olivia’s nursery. It’s called Hot Pink Zebras by Gray Malin and it was the first item that I pinned on my secret Pinterest board for inspiration. I had planned on buying it and hanging it nicely centered over Olivia’s crib, and it was meant to be the starting point of her nursery… the focal point of her entire room.

Pink zebras strutting across a field.

I fell in love with this photograph, because I didn’t want to fill my daughter’s room with princesses and pink hearts and butterflies. I didn’t want to cast any stereotypes or expectations on her. Instead, I wanted to tell her she could go anywhere, do anything, be anything she wants to be in this world. That she should feel no boundaries, no limits in the world. That her life, her world could be as big and interesting and unique as she could dream up. I wanted to tell her that anything was possible, even being a pink zebra.

Well, I didn’t buy the photograph. Turns out that poster sized photographs by Gray Malin are expensive. But I didn’t let go of the idea of pink zebras. A pink zebra is still a focal point in her nursery. 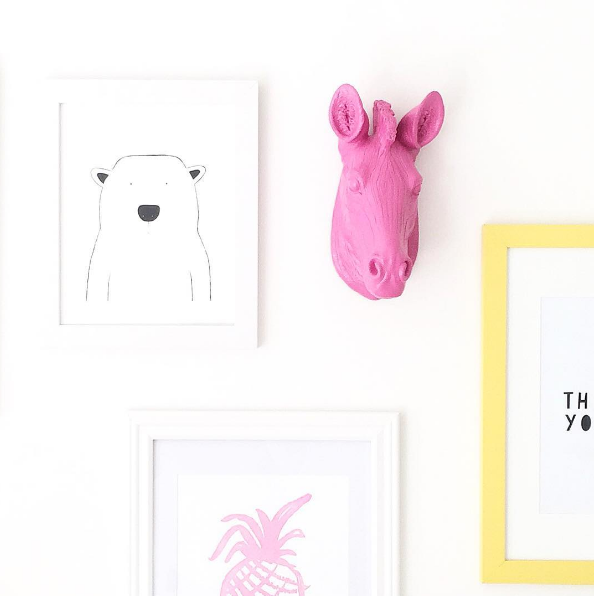 And now here we are, searching for answers – that in the world of horses and zebras, are most definitely of the zebra type. When days are hard and my head is filled with sadness and my heart is overcome with grief, I like to think about the idea of pink zebras. I love thinking about Olivia as a one-of-a-kind gal. And I tell myself it’s almost as if I knew just how special Olivia was going to be, even before she was born.

First a little update, then a big one.

To start, the little lady packed on the pounds over night, and is now officially a 7 pounder. Her overnight weight was 3,230g (7.12lbs) which is just about 2 lbs up from her birth weight. She’s still way, way low on the growth chart, but any growth is good growth for us.

For the big update: earlier this week MNG Labs completed the Next-Generation sequencing that we ordered in May. We met with Olivia’s core team, along with the pediatric neuromuscular specialists on Tuesday to discuss the results.

Unfortunately, despite sequencing nearly 200 genes that are most commonly associated with known neuromuscular disorders, the panel came back “indeterminate”. In other words: the test did not provide us with an official diagnosis, and we are still unable to associate a name… a specific disorder… something well known and understood… to Olivia’s condition.

The panel did however identify mutations on two of the analyzed genes.

This mutation is incredibly rare, in fact never seen before, so it is considered a “variant of unknown significance”. But… based on: the gene’s role in muscle function, the type of mutation (“likely pathogenic”), and Olivia’s clinical picture… it’s seemingly significant.

In order to more confidently confirm that Olivia’s myopothy is in fact a result of this gene mutation, she’ll undergo a muscle biopsy. A muscle biopsy is a relatively small procedure in the realm of pediatric surgeries, but it is still a surgery. Under a microscope, muscles affected by various myopathies have fairly distinct appearances, and depending on whether something atypical is observed in her muscle sample, Olivia’s team may be able to officially connect the dots between this mutation and how it’s impacting her muscles.

If they are able to connect the dots, Dr. C (the pediatric neuromuscular specialist we’ve been working with here at University of Rochester) will have the data points she needs to begin consulting with other specialists in the field with more of an expertise on this particular gene. One doctor in particular works out of NIH, and has dedicated his career to studying this one, specific gene!

Over the next couple of weeks as Olivia’s biopsy takes place and we learn more about what these test results mean for her, we’ll keep you all up to date. In the meantime, here’s today’s installment of: a snoozy, sprawled out baby. 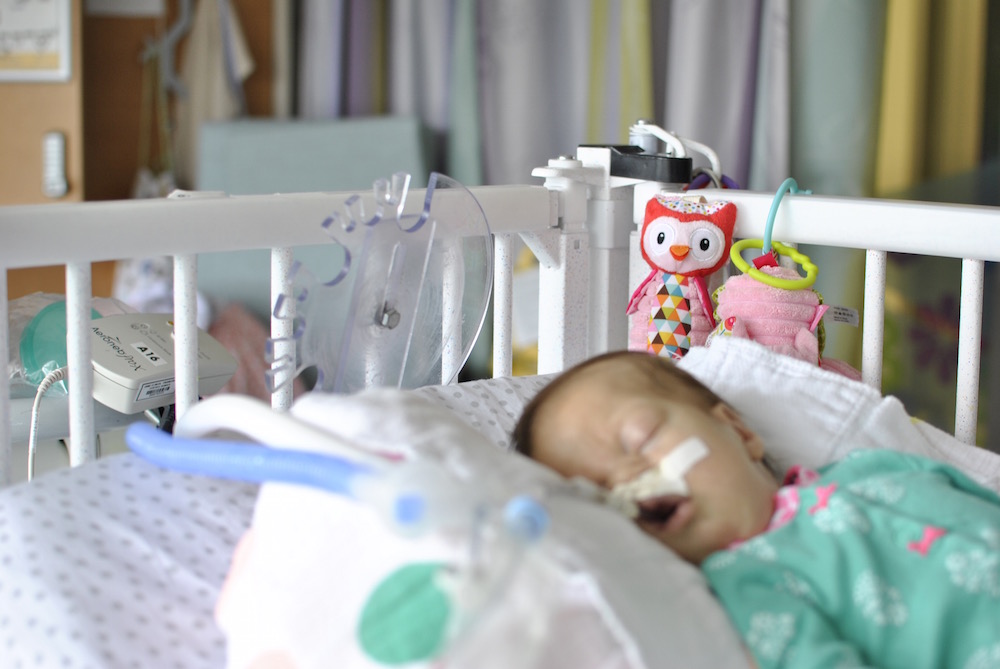 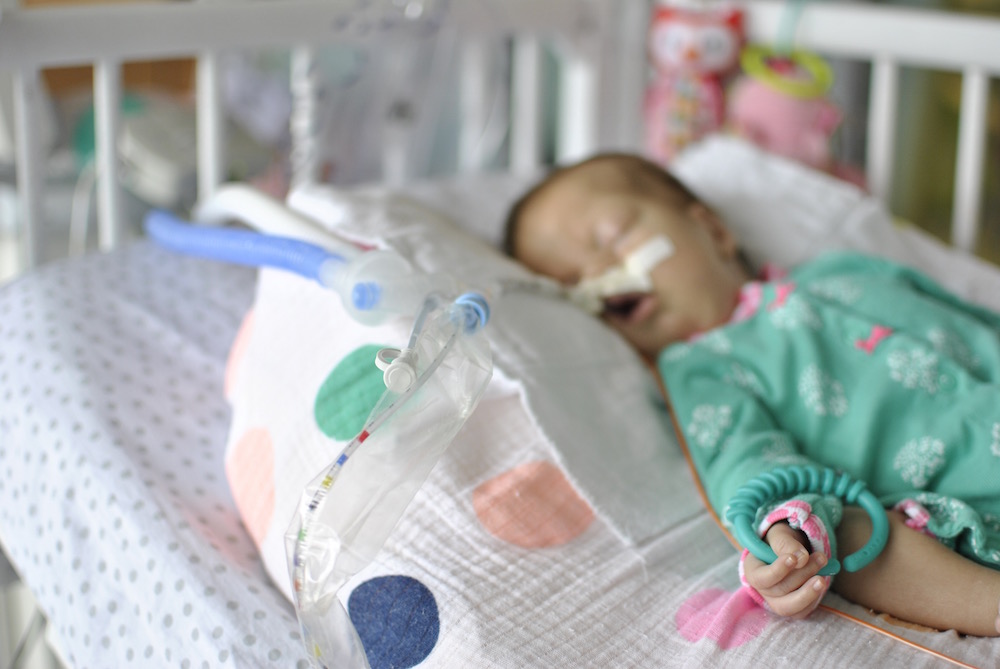 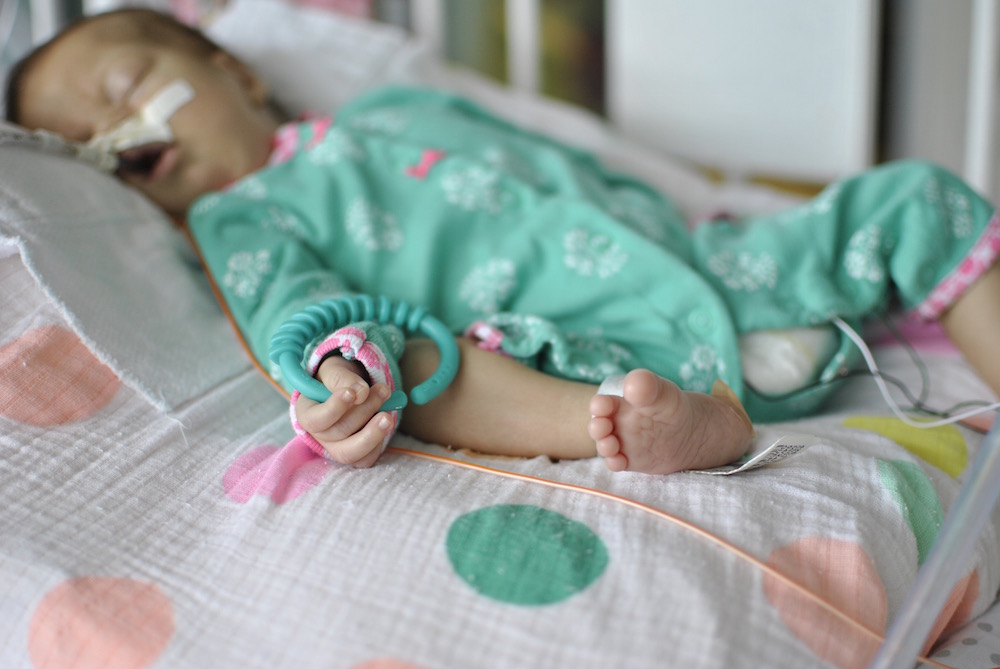